Newspaper article in advance of meeting of Association “Les Montgommery”

A  NEW BOOK ON MONTGOMERY HISTORY

Luc de Boever has published a new book on Montgomery history, especially where it

relates to the family in Normandy, France.        The book is currently available in both French and English.

and you can arrange to purchase either version from Luc at  € 22.2 Euros.   This includes shipping and handling.  See below for more description from the author.

Use the Paypal link below. 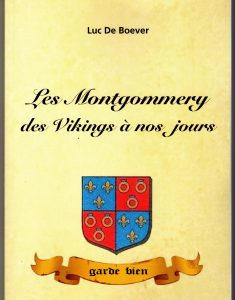 Notes from the author:

The name Montgommery comes from a place (in French Normandy near the town of Vimoutiers) called “Mons Gomeri”.
Roger I of Montgommery had for father Hugues and for grandfather probably a certain Roger who was a contemporary of Richard I, third Duke of Normandy (942-996).
Roger I married Joscelyne de Pont-Audemer and he attended the court of the sixth Duke of Normandy, Robert the Magnificent, father of William the Conqueror.
Roger I had five sons including Roger II of Montgommery.
At the death of Robert the Magnificent, Roger I rebelled against the right of the young William to become the next Duke of Normandy. In response, William’s guardian/tutor, Alain III of Brittany, arrived with an armed force to besiege the fortress of Saint-Germain-de-Montgommery. After taking the wooden fort, he burned it down.
Roger I escaped and took refuge in Paris at the court of the King of France.
Over time his son Roger II began to rally to the side of Duke William, and became one of his most faithful and powerful companions.
At the request of Duke William, Roger II assisted Duchess Mathilde in the management of the Duchy of Normandy when William set off to conquer England.
Later Roger II joined William in England where the new king gave him many territories and asked him to defend the border with Wales.
Two of the sons of Roger II made history.
First, Robert II of Belleme, who took care of all the Norman territories of Montgommery, and then Arnoul who married a princess and gradually began to install himself on his estate in Scotland. Arnoul would become the stock of all the Montgommerys who came to be expatriated around the world.
There were two Montgomery returns to France.
The first was in the 16th century with Jacques de Lorges, comte de Montgomery, a member of the French king’s Scottish Guard. He was the father of Gabriel I, who became Captain of the king’s Scottish Guard, and who accidentally mortally wounded, in a jousting tournament, the King of France, Henri II.
These two Montgomerys were at the origin of the construction of the current Montgommery manor of Sainte-Foy-de-Montgommery, which is currently for sale. Three of the desendants of this Montgommery branch are buried in the church of Sainte-Foy-de-Montgommery, which is just across from the Montgommery manor.
Then in the 19th century there was a second return, this time from America, with Jules-Alfred de Montgomery, who married a Frenchwoman in Normandy, Blanche de Portes.
Finally, in 1944 Normandy welcomed the glorious commander of the British D-Day forces, Marshal Montgomery, known worldwide under the diminutive of “Monty.”
In addition to my book, I created in France l’association “Les Montgommery” to make better known this fabulous family and to bring out of oblivion the wonderful fortress of Saint-Germain de Montgommery.
I am convinced that this family will continue to mark the history of the world!

PREFACE TO THE BOOK:

Preface to Luc de Boever’s “The Montgommerys: From the Vikings to Our Times”

Rarely has there been a lineage in European history, or in world history for that matter, as long and as brilliant as that of the Montgommerys (in France) or Montgomerys (in the United Kingdom,the USA, Canada and Australia.)

The history of this family begins in Normandy with the exploits of Roger II de Montgommery, one of the heroes of the conquest of England in 1066, and it ends (for the present at least) with those of General “Monty,”  one of the heroes of the English landing in Normandy in June 1944. Though 900 years apart, it was the same bold spirit of enterprise that brought these two events forth, the first on English soil, the second on Norman soil.

Roger II de Montgomery was an important lord in the region located on the borders of the dioceses of Lisieux, Evreux and Sees. Two place names still bear his name near Vimoutiers: Sainte-Foy de Montgommery and Saint-Germain de Montgommery. On the strong advice of the Duke of Normandy, with whom he was a close intimate, Roger married Mabille, the sole heiress of William II Talvas, who held vast estates between Normandy and le Maine. This marriage made Roger one of the most powerful barons in Normandy and an important ally for Duke William the Bastard (William the Conqueror) in his plan to conquer England. After the victory of the battle of Hastings on Saturday, October 14, 1066, the new king entrusted to him the area of ​​Arundel, where he built a strong castle, and the cathedral of Chichester, two masterful structures that still exist today. In 1074, Roger was entrusted with a key sector of the western border facing the formidable Welsh: He firmly held the county of Shrewsbury and even managed to gain a foothold in the heart of Wales.

It was from this illustrious Norman baron that the lineage evolved that showed the same audacity over time, as well in England as in Scotland, in America, and even more recently in Australia.

The other prestigious figure, more contemporary, is that of General “Monty.” Field Marshall Bermard Law Montgomery, nicknamed “Monty,” first came to prominance in the British infantry during the First World War. During the year 1942, he delivered decisive blows to General Rommel in North Africa and won the battle of El-Alamein, demonstrating for the first time that the Germans were by no means invincible. It is he who was commander in chief of the British troops engaged in the liberation of Europe during Operation Overlord, and who led the landing of the allies on the Norman coasts, on June 6, 1944.

From 1066 to 1944 the Montgommerys have never ceased to play an important role in history. Another of their descendants was responsible for the death of the King of France, Henry II, following a tournament, where the king was mortally wounded.

Such a lineage deserved a writer to dedicate a work relating not only the achievements accomplished over the centuries by its most eminent members, but also the blows of fate, the failures, the trials that some had to undergo: it was necessary to evoke “The Grandeur and Misery” of the Montgommery family.

It arrived to Luc de Boever to take the initiative for such an adventure. Indeed, living near the impressive site of the former fortified enclosure of Saint-Germain de Montgommery, he became interested both in the history of this family and also in the locations where its lineage emerged. He was the pioneer who saved from oblivion this fortified enclosure and also the motte of Sainte-Foy de Montgommery. He sensitized the awareness of his fellow citizens, attracted the attention of elected officials, and sought the intervention of the Regional Directorate of Cultural Affairs of Normandy. He created an association for the safeguarding and valorization of these two sites and supported the renovation of the church which still bears the mark of this family.

In addition, he connected with the descendants of the Montgommery family scattered throughout the world. He invited some to Normandy, where they discovered with emotion the site of of the eleventh century fortified enclosure, still intact, in spite of the assaults brought on by men and time, where the first of their ancestors came to renown.

Noone was more qualified than him to write the history of this lineage, from its origins until today, and to offer a complete genealogy. The project was conducted with rigor and method and the publication of this book is not just a contribution to historical research, it is also a tribute to the Montgommerys who were key players in the history of Normandy , the Anglo-Norman realm, Europe and the Free World.

{Pierre Bouet is a retired professor from the University of Caen, Basse-Normandie, where he taught medieval Latin and specialized in Norman and Anglo-Norman history of the 10th-12th centuries. He was founder and first director of the University Office of Norman Studies. His books include:

1.William the Conqueror and the Normans in the Eleventh Century (published in 2000)